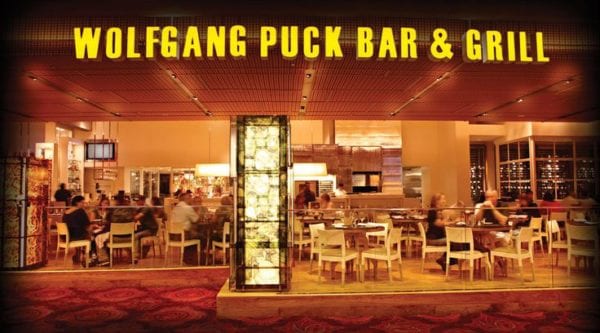 Of course Wolfgang Puck made his claim to fame from his popular Los Angeles restaurant Spago, and the new Wolfgang Puck Bar and Grill will capture some of that same laid-back California dining style.  The menu is sure to be amazing, with Mediterranean influences, interesting and fresh takes on comfort food classics, and of course some specialty made cocktails, beer and wine.

What about the old Wolfgang Puck restaurant?  The original Wolfgang Puck location on the West Side is closing on August 1 2017, and is being replaced by a new Spanish restaurant Jaleo in 2018, which will focus on traditional and modern Spanish dishes (Paella, Tapas, etc)

Instead the new Wolfgang Puck Bar and Grill is going in the empty space next to the Coca-Cola store near Planet Hollywood Observatory.  There will be no change to the quick service Wolfgang Puck Express in the Martketplace.

Disney also recently showed some concept art for the new Wine Bar George in Disney Springs, which will be run by Master Sommelier George Miliotes, and focused on pairing great wine with great food, and educating you at the same time.

I’m a little sad to see the old Wolfgang Puck restaurant go, but it’s been a while since it’s heyday and I’m excited to see what this new one will be like.  Can never have too many dining choices in Disney Springs, and it’s really coming together as the nighttime place to be.

I want to know what you think about Wolfgang Puck Bar and Grill Disney Springs coming next year.  Do you like the idea of the new Wolfgang Bar and Grill or do you prefer the old one?  What would you like to see on the menu?   Let us know in the comments section below!