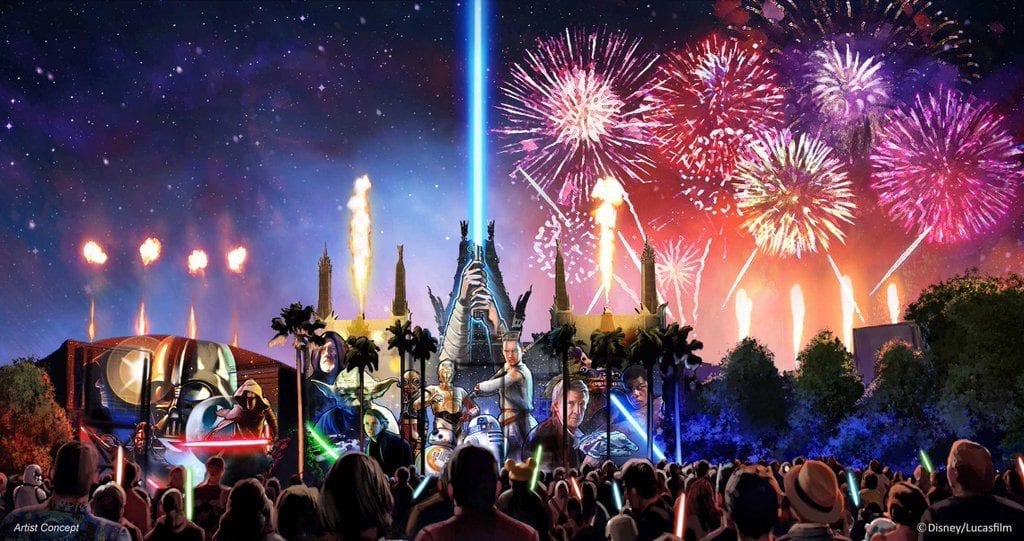 As we are patiently waiting for the new Star Wars land in Disney’s Hollywood Studios (is it 2019 yet??) As reported on the Disney Parks Blog,  Disney has announced a new Star Wars fireworks show and it sounds really stinking cool!!  Starting June 17th you will be able to see “Star Wars: A Galactic Spectacular” which will be performed nightly and is being billed as the most elaborate fireworks display in the park’s history!

This elaborate show will combine fireworks, pyrotechnics, special effects and video projections that will turn the park’s Chinese Theater and other buildings into locations we all recognize from such as twin suns of Tatooine, a field of battle droids, the trench of the Death Star, Starkiller Base and other Star Wars destinations.  It will include a single lightsaber that will project into the sky from the high spire at the center of the theater as seen in the artist rendering photo.

The show will feature music, scenes and characters from throughout the history of the Star Wars franchise, from the original trilogy, the prequel trilogy and even up to episode 7 with Rey being involved. (I pray they leave out Jar-Jar Binks)

You can expect crowds to be big for this one so if you are planning to be in Hollywood studios plan to get there enough ahead of time ( at least a half hour) to grab a good seat.

Tip: A good viewing is about half-way down Hollywood Boulevard, you get a nice view of the theater and clear view of the sky.  Another good spot is 50’s Primetime Cafe because you get the nice reflections off the water.  I’m sure Disney will be offering dining packages along with “Star Wars: A Galactic Spectacular” which will give you reserved seating.  Stay tuned for updates.

Disney has been adding some new Star Wars experiences recently with the opening of Star Wars Launch Bay in December, additions of the Star Wars stage show “Star Wars: A Galaxy Far, Far Away” and the daily march of Captain Phasma and her fleet of Stormtroopers which started this spring.  I love this addition as we continue waiting patiently for Star Wars Land, and I will being seeing it for sure when it opens up!

Let us know what you think of the new Star Wars show in the comments section below!

[…] The new Star Wars: A Galactic Spectacular has been awesome so far, with rave reviews from tons of fans.  Starting July 10th, the Star Wars: A Galactic Spectacular Dessert party is now moving from its location on Hollywood Blvd, to the Star Wars launch bay.  This will give Disney more space for viewers on the prime location in front of the Chinese Theater, because they are really crammed in there right now and all the tables for dessert were taking up too much space. […]