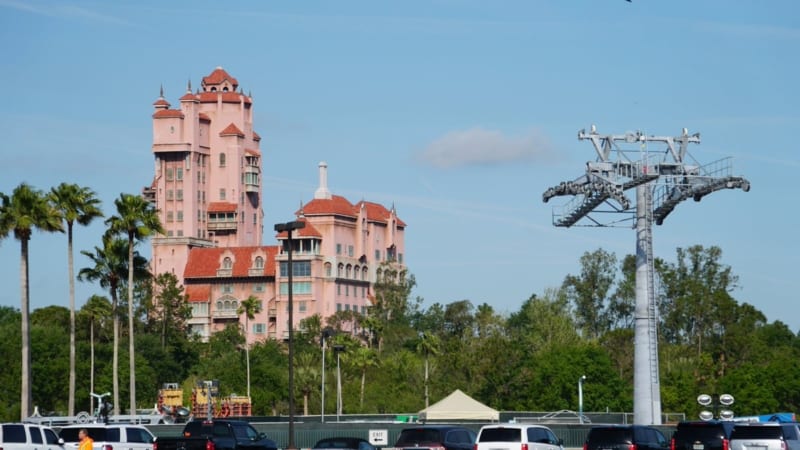 It’s becoming increasing difficult to keep up with the Disney Skyliner/Gondola construction, because literally everyday new progress is made on Walt Disney World’s latest transportation system.  Just a couple weeks ago I posted a Disney Skyliner construction update for March, but so many things have changed since then I had to do another!  Now when walking around you see Disney Skyliner Cable Support Towers everywhere in Walt Disney World, and the ones outside Hollywood Studios are especially impressive

Thanks to @bioreconstruct over on Twitter, we’re going to take a look around property at the various Disney World resorts and Hollywood Studios to see all the new things on the Skyliner!  Let’s go: 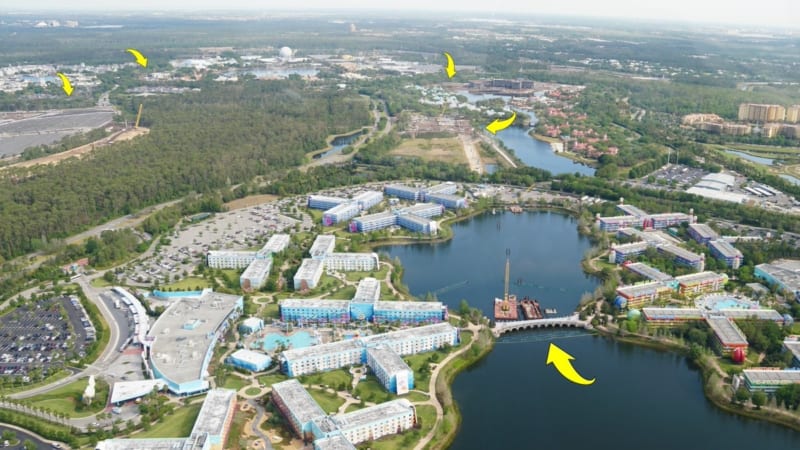 In the upper photo you can see arrows pointing to the various Disney Skyliner/Gondola Stations.  Starting at the bottom you have Pop Century/Art of Animation, the Caribbean Beach Resort, Riviera Resort, Epcot on the top left, and the far left is a turning point towards Epcot.

The next photo is similar, but includes the Hollywood Studios station on the far left: 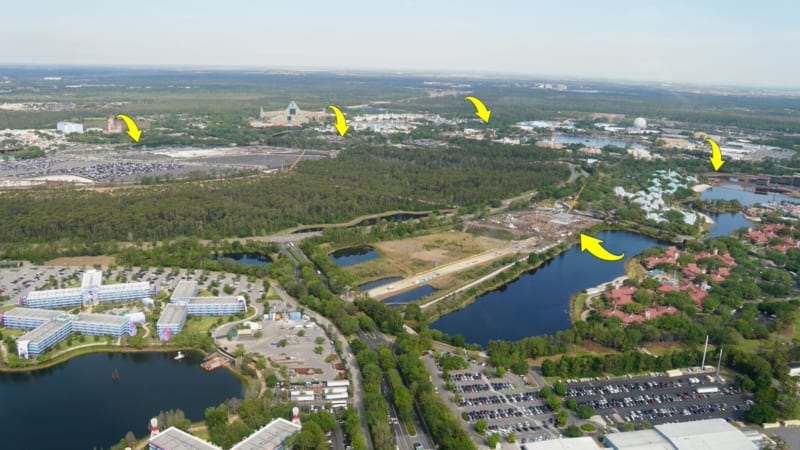 Let’s start down at the bottom with an aerial view of Disney Skyliner station for Pop Century and Art of Animation.  This station will be shared between the two resorts: 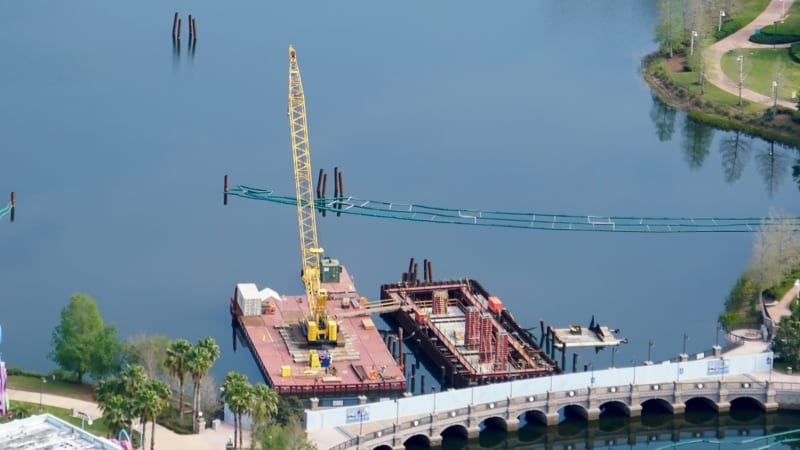 Moving up from Pop Century/Art of Animation we get to what is basically the Central Hub of the Disney Skyliner, the Caribbean Beach Resort Station.  Notice the line of Skyliner cable support towers leading up to it: 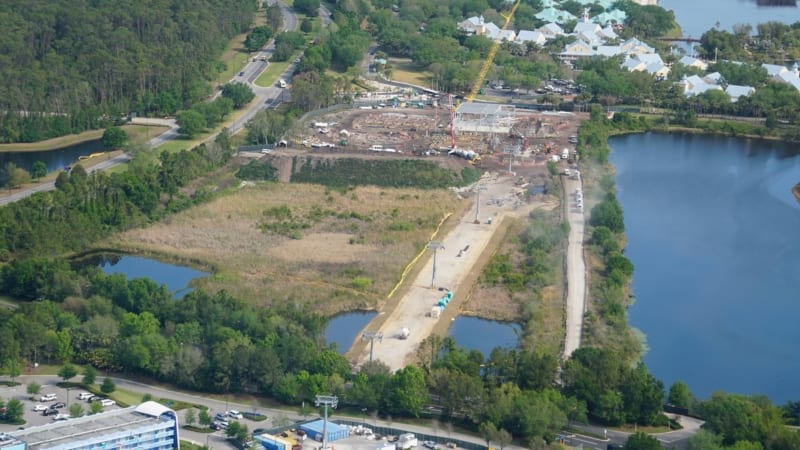 Also in this shot you can see the row of Disney Skyliner cable support towers coming from Pop Century/Art of Animation: 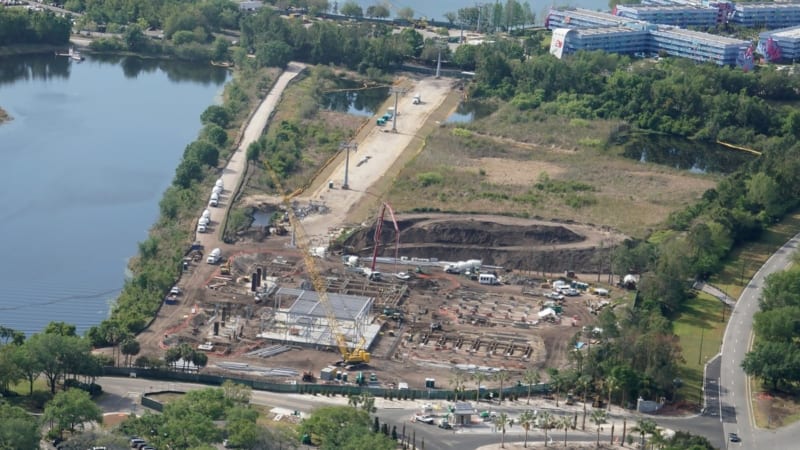 It’s the Central Hub because it’s located in a central point where it will connect 3 separate Disney Skyliner/Gondola lines and guests will transfer to the destination of their choice. 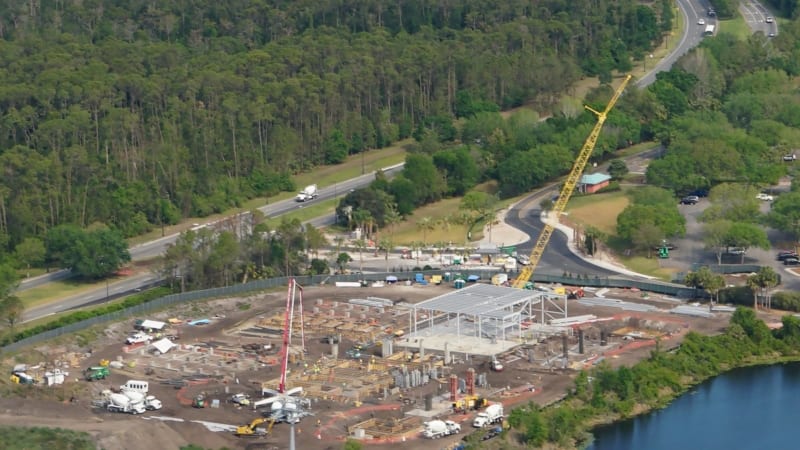 The clearing through the trees here leads to Hollywood Studios, while going to the left brings you to Pop Century/Art of Animation and to the right Disney Riviera Resort/Epcot: 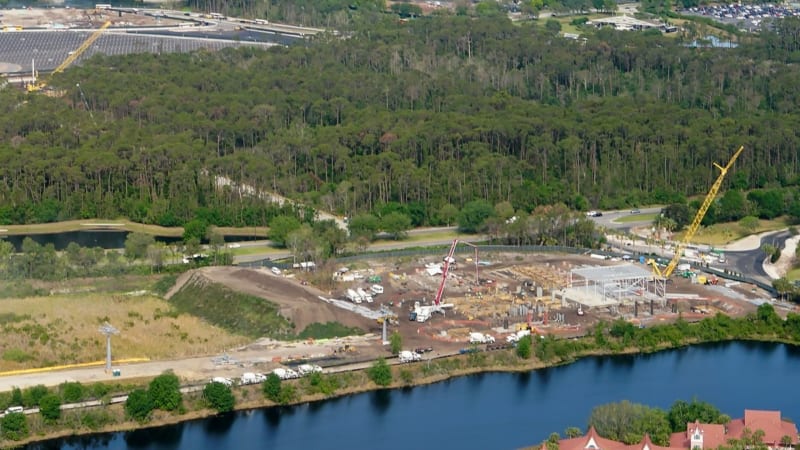 Let’s head over to the Disney Skyliner Station in Disney’s Hollywood Studios: 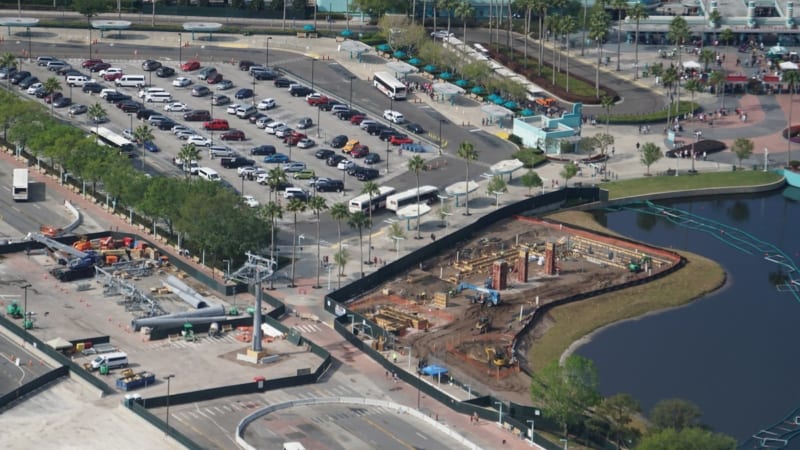 This station will pick up and drop off guests right outside Hollywood Studios.  Notice the Skyliner cable support tower already in place leading to the station: 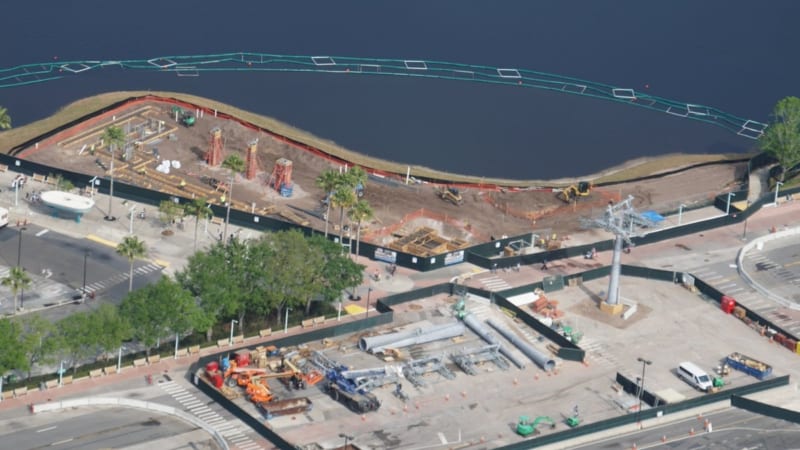 Here you can see the foundation being put in:

A lot more cable support towers have to get put up, look how many are just lying on the ground waiting:

Ground level view of the cable support tower near the station: 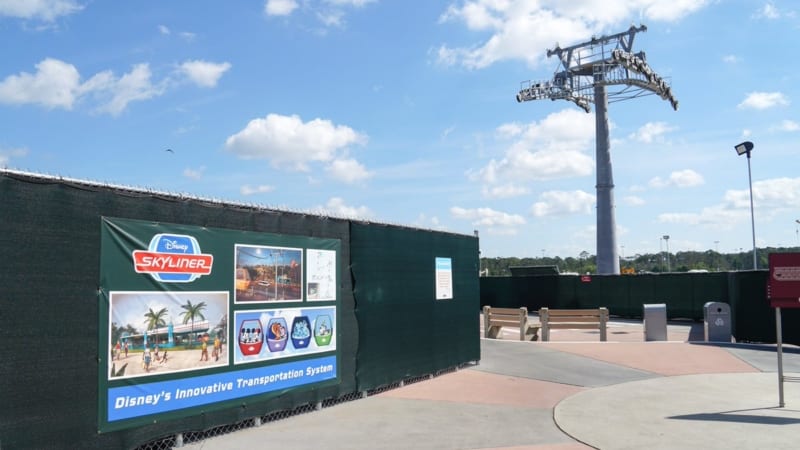 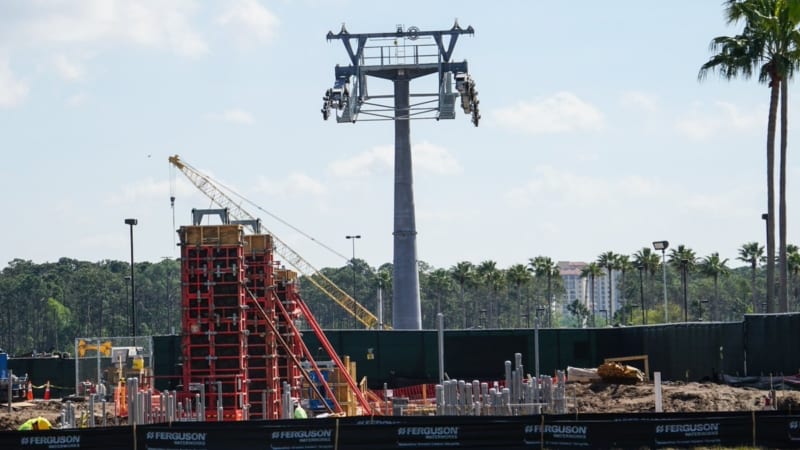 The Disney Skyliner which is being developed by Doppelmayr is a very fast an efficient way of transporting guests.  The Austrian company has a lot of experience in developing cable systems used in the Alps and each line of the Disney Skyliner should be able to transport 4500-5000 guest per hour: 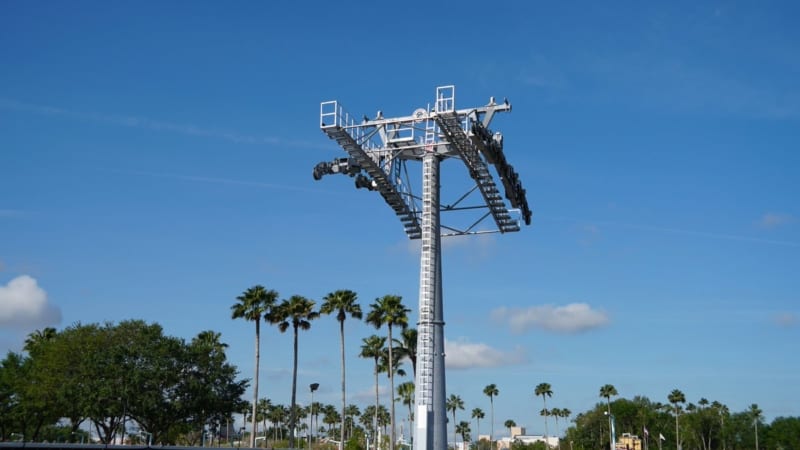 The Doppelmayr D-Line system which the Disney Skyliner is made of, is also strong and resistant to winds of up to 60mph.  That should be more than enough in bad weather conditions, apart from hurricanes obviously when the Disney Skyliner will be closed down. 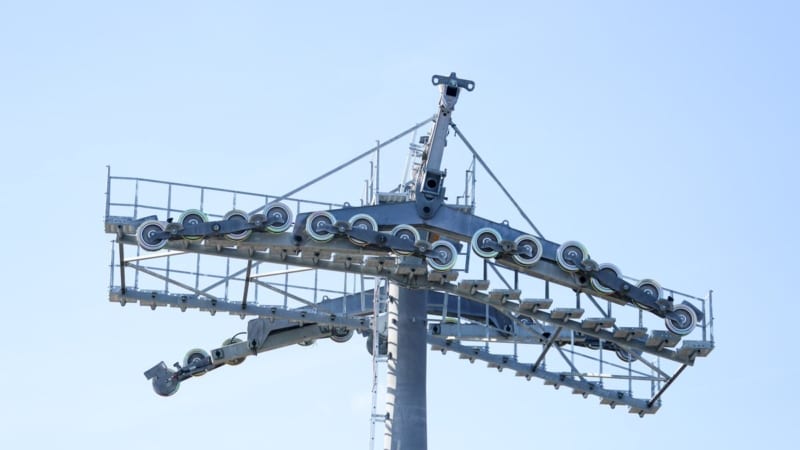 Next we head over to the Disney Riviera Resort: 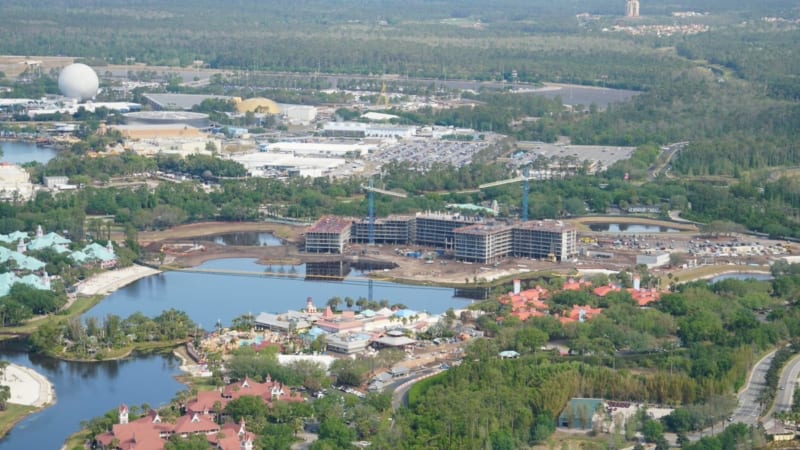 This is the site of the Riviera Resort Disney Skyliner station.  Notice similar foundations being made as the ones at Hollywood Studios: 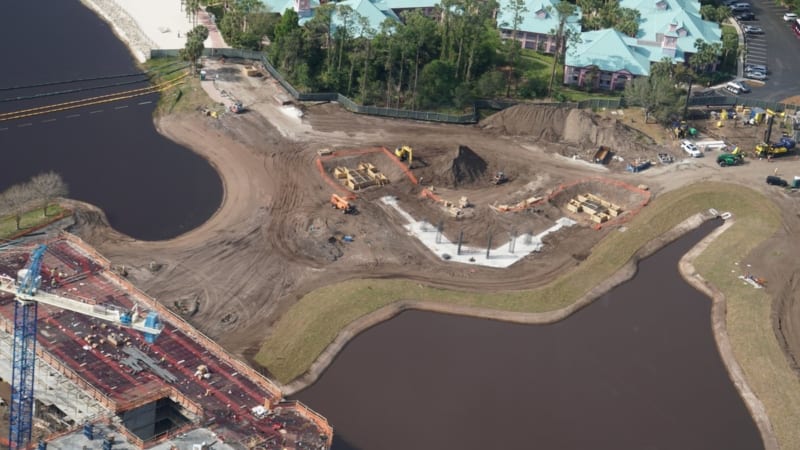 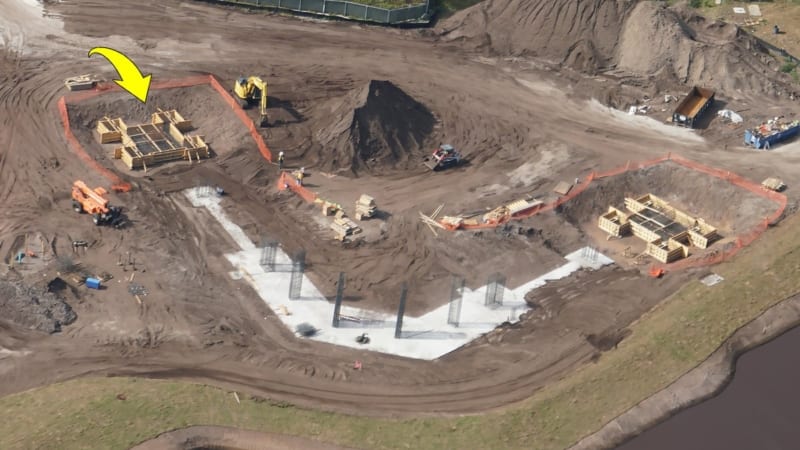 Construction on the Riviera Resort itself is coming along nicely and has already reached the 7th floor: 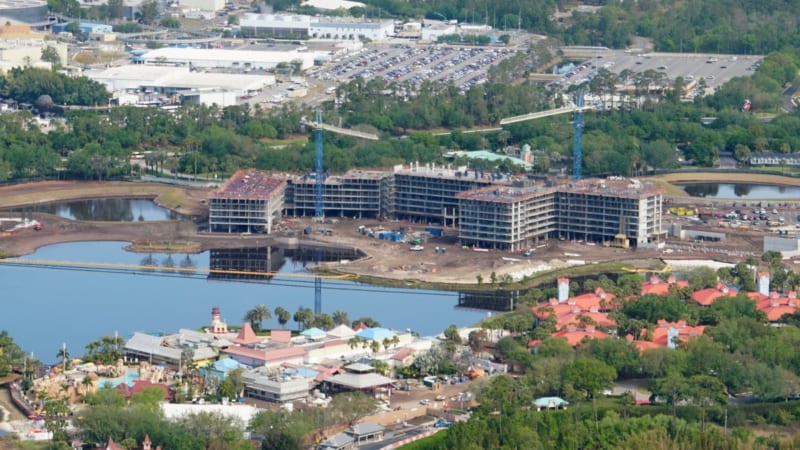 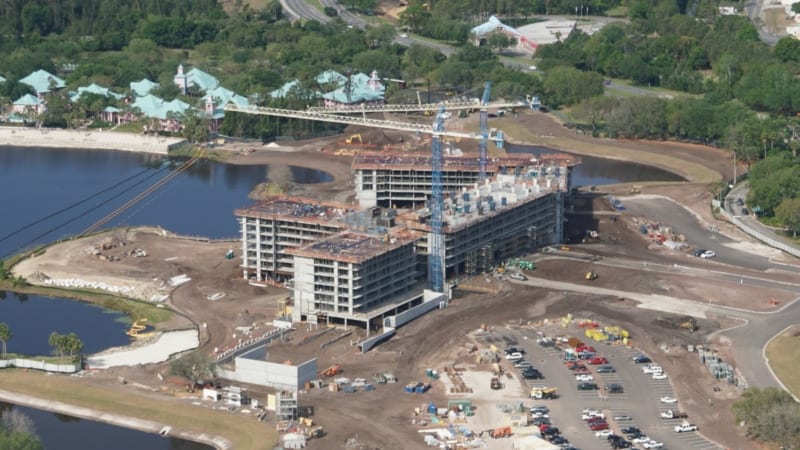 Once the Disney Skyliner leaves the Riviera Resort, it will hit the first arrow, then continue to the far one where it will make a turn to the right towards Epcot 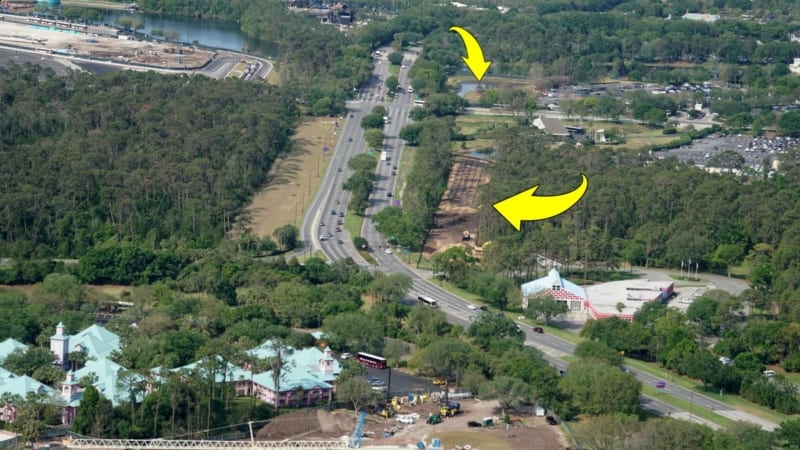 I want to know what you think about the Disney Skyliner Progress and the Cable Support Towers everywhere.

Horrible for Epcot resort guests and DVC owners. Disney charges huge prices for this location by IG at EPCOT at short walk or boat to DHS. Now guest at value and moderate resorts will have the same while paying 1/3 the price. The IG is a small entrance made for the Y&BC, later to include BW and Swan and Dolphin. Adding 4 more resorts will destroy this once quiet area. There are 2 finger scanners there and not much room to expand or even any plans to do so. 1 hour waits in our future and yours, not to mention those values will probably not so cheap anymore! It has no value whatsoever to Epcot area hotel guest. Some people say they can't wait for the great park views, well at no point anywhere do either Skyliner flyover any park! You will get a ride thru some cut down trees,some parking lots a gas station and the dumpsters behind Morocco and France.

they need to expand the entrance at the IG or it's gonna be chaos. And I'm with you, I don't like the sound of a full Boardwalk either..

Great idea. Will save time and make it more convenient for the guest. Two concerns, lighting and August is very hot. Really need AC. There will be no shade and the gondolas will get hot.

I agree, I think it's absolutely necessary!