Well it didn’t take long for Disney to make due on what it said about adding warning signs to it’s beaches.  Not only is Disney putting up signs, but they are even putting up fences on the waterfront to block anyone from entering the water.  Yesterday and today they went up around the beach fronts of the Disney Resorts.

Disney has released a statement with the following:

“We are installing signage and temporary barriers at our resort beach locations and are working on permanent, long-term solutions at our beaches. We continue to evaluate processes and procedures for our entire property, and, as part of this, we are reinforcing training with our Cast for reporting sightings and interactions with wildlife and are expanding our communication to Guests on this topic.”

My friend Tharin White from tharinwhite.com was kind enough to send some pictures of the construction of the fence and signs at the Grand Floridian Resort: 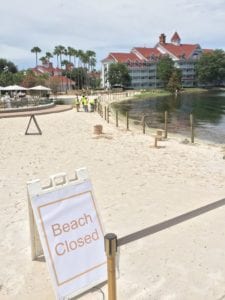 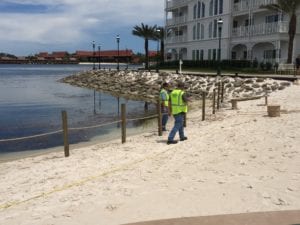 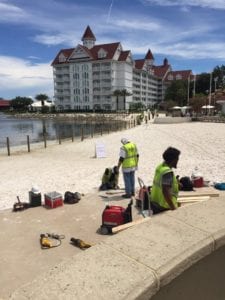 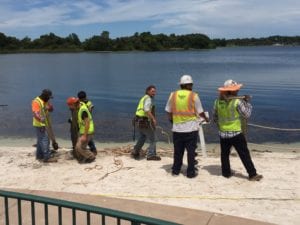 Here’s the Official Sign file they sent out to the media: 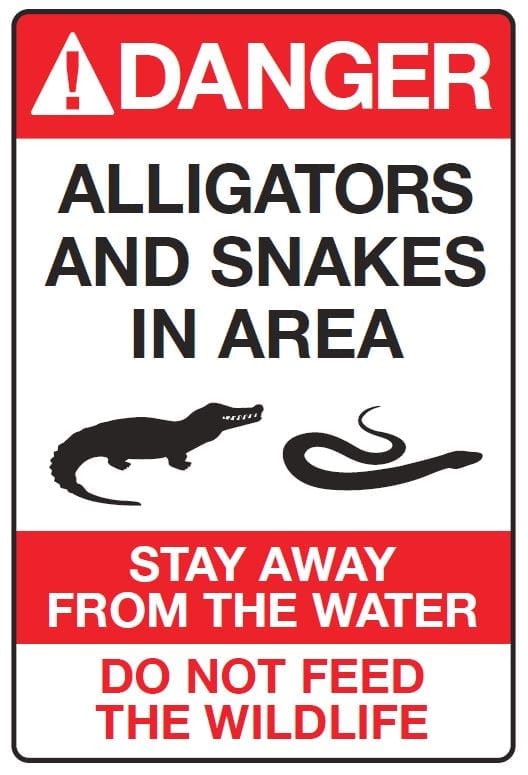 Well I would say that the sign itself is definitely an improvement over the old one.  If you didn’t know about potentially finding gators, you certainly do now!!  I do however have a problems with the fences.  I think it’s a little over kill and unnecessary.  It completely ruins the sight-line of the beach.  Instead of relaxing on the lounge chairs and watching the calm water in front of you, you now have an ugly fence.  Ruins the mood a bit for me.

Also I don’t know how it’s going to keep people safe because if the gators want to get through they can, and this does nothing for gators making their way up on walkways, on the grass, etc.  I was reading one article yesterday that had an interview with a Florida wildlife experts in it.  He said basically no matter how hard Disney tries or how much money they spend, it’s literally impossible to keep gators off the Disney property…it’s so huge and there are so many waterways and canals that the gators will just keep coming back.  This is the gator’s habitat and we are talking about a wild environment.  That’s part of the beauty of being on some of these properties (like Fort Wilderness).  So unless you want to totally do away with these locations, there will always be a bit of risk.  People just need to take the proper precautions.

A better long term solution needs to come into place, and it sounds like from Disney’s comments they are still working on that.

One that will help is not feeding the alligators.  That’s something that happens on a regular basis and Florida wildlife experts all agree that if you feed gators, they get more and more used to humans, which means they are going to come back…and next time maybe too close.  So when you make your next trip to Disney, please make sure not to feed them and discourage anyone else you might see as well.

Experts are saying Disney is going to be facing a potential multi-million dollar lawsuit soon from the family of the boy that was taken by the alligator on the beach at the Grand Floridian Resort.  As you know the signs advised not to swim in the water but it wasn’t explicitly written there were gators in the water.  Disney as you saw in the pics above is obviously correcting this, but it’s likely too little, too late in the case of the Graves family.

Disney does have the practice of removing the gators from it’s bodies of water, where whenever a gator is spotted it can be taken out.  But according to law experts, Disney has an obligation to explicitly warn it’s guests of the potential dangers on it’s properties, something that wasn’t done ahead of time.  And since we are talking about a family from Nebraska, it’s quite likely a lawyer will be able to make a good case in a court of law that they wouldn’t have been aware of the dangers on the Disney property (I’m pretty sure they don’t pop out of the cornfields near their home)

I’m sure Disney will want to settle out of court, but with the amount of money at stake that’s unlikely to happen.

Statement from the Graves Family:

Today the Graves family, obviously devastated by the loss of their son made a statement to the public:

“Melissa and I continue to deal with the loss of our beloved boy, Lane, and are overwhelmed with the support and love we have received from family and friends in our community as well as from around the country. We understand the public’s interest, but as we move forward this weekend, we ask for and appreciate the privacy we need to lay our son to rest. Neither Melissa, myself or anyone from our family will be speaking publicly; we simply cannot at this time.” 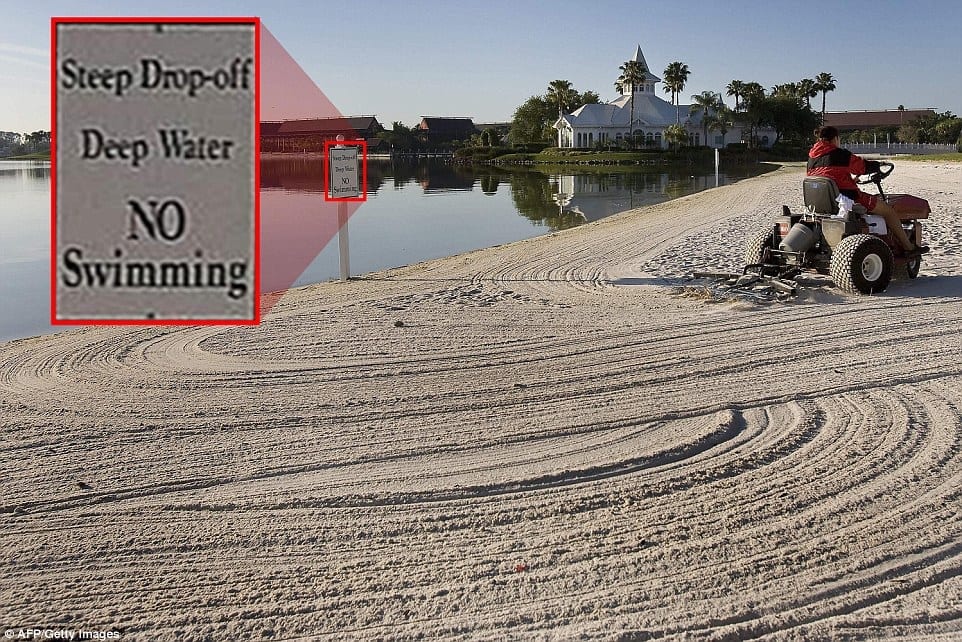 Sign at the Grand Floridian says: “No Swimming” but doesn’t mention alligators

In light of the alligator attack that killed 2 year old Lane Grave on Tuesday night, The Walt Disney World Resort did confirm they will be adding new signs warning of the danger of gators.  It’s not sure exactly how many signs will be put up and exactly what they will say, but it’s obvious they have to do something.

Since the attack Tuesday night, many more stories are coming out from other guests that say they have had close calls with gators while at a Disney Resort.  Gators have been spotted in the Seven Seas Lagoon, at the Coronado Springs Resort and in the water around Tom Sawyers Island.  One Disney employee also said he had warned the Grand Floridian that the area should be fenced off.

I myself even remember years ago, seeing gators at Downtown Disney with my dad (what is now Disney Springs).  So it definitely is quite a normal occurrence.

Walt Disney World Vice President Jacquee Wahler said in a statement Thursday: “All of our beaches are currently closed, and we are conducting a swift and thorough review of all of our processes and protocols.  This includes the number, placement and wording of our signage and warnings.”

We’ll see when, how many and exactly what these new signs say in the near future.

Make A Statement At The Beach

[...] of this, we are reinforcing training with our Cast for reporting sightings and i [...]